Some blistering guitar work in this linked video by Mike Bloomfield with the Electric Flag at the Monterey Pop Festival. The Flag, alas, were one of the acts that didn’t make it into the movie, which is a shame as Bloomfield was at the top of his game. But then the Electric Flag not making director Pennebaker’s final cut was really just another in the long line of missteps and misfortunes, mostly self-inflicted, that has left Mike Bloomfield perhaps the most forgotten guitar hero of them all. Indeed so forgotten that it’s startling to hear him speak in this clip from the Newport Folk Festival (about 3:20 in, just past Son House) because unlike his now legendary sixties guitar hero brethren, almost none of us has ever heard him speak. So dig his rap, the rushes of words, fragments of sentences, full of beatnik speak and musician jive and sounding incredibly like Jimi Hendrix, actually, whose voice we all have memorized. It must have been the way serious young players talked in the joints and road houses and cafes on the circuit in the early-mid sixties, where both Mike Bloomfield and Jimi learned their trade. And though some of you, perhaps even most of you, might not recognize Mike Bloomfield by name, you definitely know his sound–that’s him on Dylan’s Like A Rolling Stone, indeed all over Highway 61 Revisited, and that was him raising hell with Dylan at Newport. The second half of the sixties was an amazing period for Mike Bloomfield–Dylan, Paul Butterfield (East-West was one of the rock’n’roll game changers back then), The Electric Flag, Super Session–but he disappeared up his arm in the seventies and ceased to be entirely before the eighties even got started. A long time comin’ is a long time gone.

Pulling out LPs that I didn’t even know I had. Check out Mike Bloomfield here on Woody Herman’s Brand New (1971).

“Hitchhike on the Possum Trot Line”

Alan Broadbent is playing the groovy electric piano, it’s his tune. Frank Tiberi and Sal Nistico are back there on tenor. Woody is playing the soprano sax. Dig he and Bloomfield dueling it out past the 3:30 mark. You can hear Bloomfield at the top of his game on this record….it was all downhill from there. But then Herman had seen all that before, four brothers’ worth.

According to Ralph Gleason’s liner notes, Bloomfield was a huge fan of swing bands, especially Herman’s. Gleason suggested him to Woody who jumped at the chance. He was always filling the ranks with kids, and his band had a sixties rock’n’roll energy to it. Lots of rock covers, not all worked, but even those were noble failures. Herman confided that the band never got around to sending the charts to Bloomfield, who was freaking. Woody told him not to worry about it, it’s all the blues and to just come in and wail.

Which is how it happened. On the opening cut Bloomfield seems kinda nervous, but he opened up as he went along and by the end of his four tracks he was burning the place up. I don’t think he ever played with the band live, however, which is a drag. But then Bloomfield was a mess by then. I’m sure Woody Herman would have loved to do a whole tour with him. Woody Herman and the New Thundering Herd featuring Mike Bloomfield. Imagine the possibilities. It could have turned kids onto a great, hot band that didn’t sound like their dad’s record collection. And it might have revived Mike Bloomfield’s career. It hadn’t been too long since he’d played on Highway 61 Revisited, or helped Dylan outrage Pete Seeger at Newport. He’d blown minds with the Paul Butterfield Blues Band on East-West in 1966, played Monterey with the Electric Flag in 1967, went gold on Super Session in 1968. He was everywhere in 1969. Nowhere in 1970. By 1971 he was nearly forgotten. Hearing him here with Woody, though, each driving the other up in intensity, it’s hard to imagine that by then he was no longer one of America’s most influential guitarists. But he wasn’t. He was heading toward oblivion. Most people didn’t hear his name at all until ten years later when he was found dead in his car. He hadn’t died in his car. He’d died, rather inconveniently, at a party. So they put him in his car and drove him to another part of town and left him there. No note, no nothing. Police found him in the morning. It was in all the papers. Mike Bloomfield, I remember him.

When this album was released it got some airplay on jazz radio, as Woody Herman albums always did. Rock radio didn’t even know it existed. Oh well. Another of those what ifs that no one even knows was a what if. 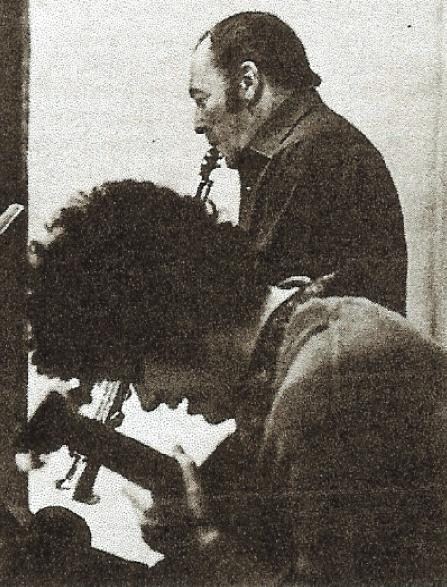