Robert Omlit was still Robert Logan at the time. Aside from Louisa May Alcott, I can’t remember what we talked about. Books, I’m sure. We were both constant readers. I’d plunder the library’s history section–Bruce Catton was a favorite–and dinosaurs. He read the classics. Each of us read a book a week, at least. We were unlikely best pals on the schoolyard, skinny funny-looking little Robert and me already five and a half feet tall at age ten. I suppose I kept him from getting beat up. I don’t think we hung out that much after school. Probably lived too far from each other. But I don’t know. He had a Stingray, I remember. I had a Schwinn.

My family moved to Virginia halfway through sixth grade and when we moved back to Orange County a year later it was to another school district. So I sort of lost track of Robert Logan. I remembering hearing from another friend that by junior high he’d gotten a bit hippie, wore an armband to school during the Vietnam Moratorium in 1969. Developed what they used to call a consciousness. Certainly smoked weed before I did, way before. But we both turned into rock’n’roll fanatics, though he was a ahead of me on that too. I was still listening to AM when he was already deep into FM.

By the end of high school I had completely lost track of Robert Logan. Doubt I thought about him much, if at all. This is probably fairly typical of kids always on the move.  I’d spent only one grade, the third, in one school, while my second grade began in San Diego and wound up on an island off the coast of Maine, by way of Anaheim, Tacoma, and Anaheim again. I think I met Robert after a move from Massachusetts in the middle of the fifth grade (I had a good friend in Massachusetts though I have no idea who he was now), and midway through sixth grade we split for Virginia (just as the torrential rainy season of 1969 began, ahead of the flooding by a day) where I had two good friends. We lived near a naval air station and there were several MIA families in the neighborhood. One’s father had been shot down over North Viet Nam and was MIA. You could see the strain in his mother, a very pretty blonde lady stretched taut with worry. My other friend was a kid from North Carolina named Cliff. He was the first real down home southerner I ever knew and as likeable as it was possible for a kid to be. I never had the usual hung up Yankee attitude towards southerners, no doubt because of Cliff. Too bad I don’t know his last name anymore. We were too young for Nam, barely (they stopped registering for the draft five days before my 18th birthday) so he wasn’t killed over there. A lot of older kids just like him were. Cannon fodder. Gung ho, but cannon fodder. You know you’re losing a war when you throw 18 year olds into it just to get shot.

But that’s all I know…that they couldn’t have been killed in Viet Nam. Otherwise I don’t know their last names or even their firsts. Robert Omlit should have been one of those. Another of the best friends that disappear if you move around a lot as a kid. After a dozen moves, maybe more, and I had lost track of almost everyone in my childhood. Robert Logan was one of the exceptions. He I remembered, if only through retelling the story of being slammed on the head by a copy of Little Women. That’s a good story. Someone mentions Louisa May Alcott and I get the laugh. They’ve made it into a movie five times. Every time it pops up on Turner Classic Movies, no matter what version, I tell the story. I even tried to watch it once, the Katherine Hepburn one. Got about five minutes into it and had enough. No wonder I made fun of him for reading it.

Anyway, about 1979 or ’80 my brother Jon told me about Robert Omlit. Robert who? Robert Omlit. He knows you. Says you went to McFadden Elementary School together. He described him. The glasses, the head, the voice. It was Robert Logan. I have no idea when he became Robert Omlit, or why. But he took a lot of acid though, and sometimes names change. I knew a guy who began a trip named Bill and ended it as 315. We called him Three for short. Spelled 3. His sister Nancy wound up as Veranda. That was some good acid. Of course, everyone got new names when punk hit. I became Brick. I’m not sure why we all changed our names. Rebellion, I guess. Shedding skins. Fucking with convention. Whatever. Robert Logan became Robert Omlit.

My brother met him through the Fullerton punk scene. Kids of the Black Hole and all that. It was surreal to me that Robert Logan was in the vortex of this demented creative Fullerton punk rock scene, that Robert Omlit was one of the wildest punks around. I finally met him again at some gig somewhere…don’t know if it was in LA or down in OC. Might have been at the Buzzcocks at the Santa Monica Civic, late 1979 or early ’80. I remember he crept up behind me and when I turned around he said hello and had this intense, bemused look. Maybe he was tripping. We talked briefly but the music was loud. If that was the Buzzcocks gig it was a killer, with Gang of Four and the Cramps opening. Intense stuff. Saw him again at the Cathay de Grande I think and he must have been tripping. Odd statements. Non sequiturs. Hard to understand. Funny, though. Then I saw the Omlits play a skanky little bar around the corner from our place in Hollywood–think it was the Monte Carlo 2. Pretty wild punk rock. I don’t think kids play punk rock like that anymore. Everyone would hate it, and that is no longer seen as a good thing. It was then. You wanted people to hate your band. Not all bands did, but some of us saw it as a point of honor. It’s just that Robert took it a bit further. I remember the management of the Monte Carlo 2 was not amused.

I saw him a few more times. I wish I could recall what we talked about, but it was thirty years ago. He was really into GG Allin, that I remember. Like GG was the greatest thing ever. He almost got GG Allin to play the Monte Carlo 2 but GG got arrested or was in the hospital or something pathetic. So the Omlits headlined and no one missed GG. But Robert was pretty crazed by then himself, a lot of acid and nihilism, a punk rock extremophile even by the standards of the time. Absolutely unique. Quite mad. Visionary. Suicidal. Which ended it, finally. It usually does.

So it was nice–and surprising–to see Ned Raggett’s piece “Robert Omlit: An American Hardcore inspiration who was too punk for the punks”. Finally Robert slips into recorded history. He was a legend, but history kind of pins him down better, I think. Throws some light. Maybe a cult following will develop, with limited releases and mentions in academic histories and kids a little too into him. He’d dig that, I imagine. A legacy.

Little Women hurts, by the way. I was surprised, saw stars, felt pain, and even in 5th grade knew that being slammed on the skull with a volume of Louisa May Alcott was a rare event. And now it’s a footnote to history.

Oh…he read Little Men, too. I rubbed my head and said nothing. 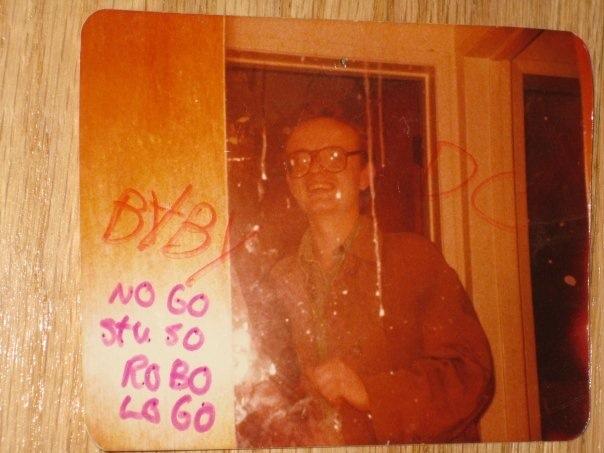 Robert Omlit in the legendary Black Hole c. 1979, still looking like I remember him a decade earlier. (Photo posted by Stuart Barnes on Facebook.)

One thought on “Robert Omlit”