Lucky Thompson is no more.

Seattle.  He’d been there a while.  Stories were going around a few years back that he was down in nearby Tacoma, on and off the streets.  Brusque. Strange.  Working on an opera. I think he died in a home, though.  He was 81.  A good long life.  Well, part of it was good.  The last couple decades, since Lucky left the faculty at Harvard (was it? Or Colombia?)…well, they weren’t so lucky. Maybe just pre-ordained. By Lucky. Out there on the street, his head filled with arias. Alone.

That’s how my favorite of his albums—Lucky Strikes—begins. Hank Jones lays down a beautiful little coda, then in comes Lucky on a soprano sax, blowing those seven ascending notes to open the seven-syllabled “In A Sentimental Mood”. Which is what he is really saying, of course.  “In A Sentimental Mood”, just the slightest delay before “Mood”, which he then hangs onto, exhaling it into nothingness. It’s music, though, and you can make it say whatever words you want. It could say ABCDEF…Geeeee. It could say I like ham and cheese on rye. Anything. When I read his obituary, and those Tacoma tales came back, the words I heard as the melody blew through my mind was “Lucky Thompson was alone.”  He was.

Hadn’t always been.  He was a big part of the Central Avenue Scene.  He shows up repeatedly in the autobiography of Mingus (who himself once wound up out on the street, arias in his head.) He was a major player.  Not a legend (though he might now become one; death opens up all kinds of possibilities); nor an institution.  Not even someone you hear many players cite as a prime influence.  But Lord could he play.  On tenor he was bop with a powerful swing undercurrent.  Never overly cerebral, always a hint in there that deep down this was a dance music. But on soprano…it just opened up. No one played like that.  No one plays like that. It was an old horn, hand crafted, so that on record you can almost feel the breath blowing through it. Hints of clarinet, of Barney Bigard.  Hints of Sydney Bechet, of a New Orleans funeral blues. A whiff of a jazzy primordial stew.  He doubles those notes when they come up again, tucking the added note just behind the original, lets the final note stretch to a glassy opaque, and the rest of the head ripples away, meandering up and down the scales of the horn. Hank Jones takes a gorgeous solo and brings it all back down to rich, loamy earth, then voices those ascending notes like a choir. Lucky takes the lead again, he and Jones flurry together like a couple butterflies and then Jones comps, his deep voicings bracing Lucky’s extra-ordinarily frail blowing of the head, those seven notes, all by themselves, lighter than air. Wisps. The last one hangs free, by itself. Alone.  Then piano and soprano saxophone link again, dancing around Duke Ellington’s melody to a delicate finish.

Lucky Thompson was all done. 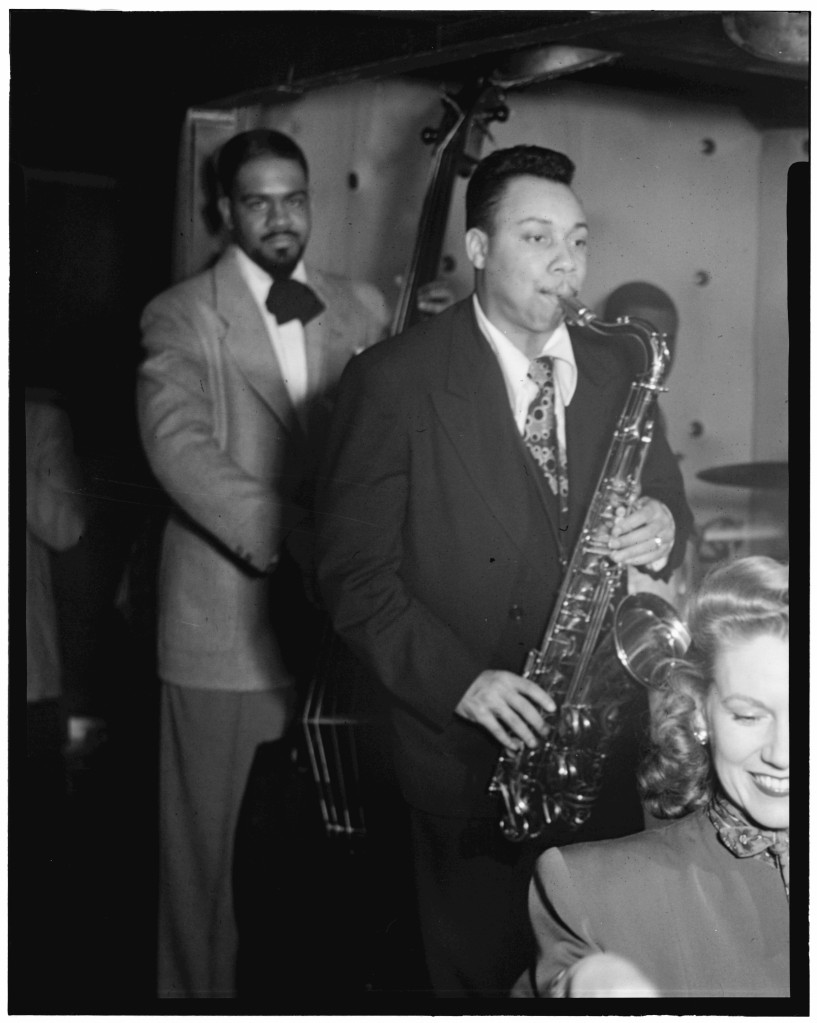 Downbeat caption, July 1948: “Swing was born on Fifty-second Street. Devotees still go there for hot music. Here, at the Three Deuces, Hilda Taylor and a friend enjoy the Lucky Thompson orchestra. A former Miss North Carolina, she is now a professional singer.” That’s Al McKibbon on bass, and the photographer was William P. Gottlieb.

I don’t know if they called kids in horn rim glasses poindexters when you were kids, and these aren’t exactly poindexter worthy glasses, but I finally gave in and got some glasses that don’t bust after being squeezed onto my skull. Large frame glasses, they’re nice enough to call them. Apparently the hugely skulled are […]