Watching the end of Jimi Hendrix at Monterey and amid the smoking wreckage Mitch Mitchell rockets his sticks into the stunned stoned freaked and tripping crowd and every time I see it and (and I’ve seen it a hundred times) I think that I would have given anything to have been in that crowd and caught one of those sticks, it would still be my most treasured possession, that stick, even now, that half a century before had rolled across those toms with absolute abandon and bounced with loose wristed splats off the snare and set the cymbals roiling and splashing and crashing with Jimi’s every move and sound and look and thought. Airborne for only a second or two, the sticks disappear into offstage darkness, first the one, then the other and Mitch, laughing, steps out of view. I turn off the TV right then, before the interviews begin and reduce the music to history, and I wonder again about those sticks.

Apparently Jimi does not live today. Even amid all that feedback and rollicking rolling drums, he does not live today. He knows for sure, he says. Well, actually he doesn’t. Not anymore. Not in a long time. But I know, wasting my time existing, that there ain’t no Jimi nowhere. Feedback, cataclysmic drums, handclaps and chanting and fade. Damn, man.

We’d been at an all nite rock’n’roll party in a double wide outside Perris, way back in the hills, with dirt roads and recent rain and lots of mud. Car was filthy by the time we were back on the 215. We smelled Norco coming up–a lot of cows in Norco–and needed gas so we pulled off and filled up. The guy at the counter asked if I wanted a car wash with the gas. I’d never seen a drive-thru car wash in a gas station before so I said sure, the best. So after filling up, we made a tight turn and pulled into a miniature car wash tucked behind the station. All was silent for a moment, almost eerie, then whoosh, fwoom, clank, spritz, splash, and the car began moving through a tunnel with psychedelic suds and giant pummeling brushes and scrubbers and blowers and more psychedelic suds and more pummeling scrubbers and flopping squeegee windshield mop things and more colors–a lot of green and blue with streaks of pink and yellow–and more blowing till finally we emerged at the other end awash in air and the windshield alive with rinse water droplets trying to escape evaporation and we were back in the sunlight, gleaming. The car wash turned itself off behind us. All was silence.

So we did it again, the whooshing and fwooming and clanking, the spritzing and splashing and the washes of psychedelic suds, the giant pummeling brushes and scrubbers and blowers and more psychedelic suds and more pummeling scrubbers and flopping squeegee windshield things and the greens and blues and pinks and yellows and more blowing and the droplets trying to escape evaporation. Then we were back in the sunlight again, and gleaming, and all was silence, all except Jimi Hendrix, who we’d cranked on halfway through, busily chopping down a mountain with the edge of his hand.

A few years later I was at work checking out the new site design. It was wild–colors and sounds and motion and music and was really cool. Overwhelming even. This virtual reality was a trip. I loved it. Afterward we were asked what we thought of it.  I struggled for a comparison. Then it hit me. Virtual reality, I wrote, is like a drive thru car wash in Norco.

Which is another reason why I never made a million bucks in the Internet industry.

(Found this posted on both Just Another Blog From L.A. and MetalJazz.com. Both are great blogs, btw. I assume I’d written it as an email. 2008)

RIP Mitch Mitchell. Jimi Hendrix’s drummer. The dude wailed like nobody. Tiny little English bastard doing his best Elvin Jones. Cool. And man could he get up a shambolic shuffle. Listen to “Hey Baby”…the one from “Rainbow Bridge”. Hip hippie jazzness at it’s best. Wasn’t another rock drummer that could play just like that. Dropping in Max Roach snare snaps and rim smacks and riffling popping toms, some heavy tom shit like Joe Morello in “Take Five” (remember that one? Mitchell apparently dug Morello’s thunder rolls) and all that Elvin that Jimi wanted–like when they come out at Monterey and light into “Killing Floor” and Mitch’s rolls are so all over and so in there (or close enough) and man, it’s frigging glorious. Crazy crazy rock’n’roll, man. Just like god intended it to be, if god smoked a lot of dope and didn’t worry too much about meter….

Did he and Keith Moon ever play together? Can you imagine?

Nice guy, too. It was a dinner party somewhere in Silver Lake, eons ago. All these miserable guitar players wanted to play “Red House” with him, like he hadn’t been there and done that like sooooooooooooooo much better…. Incredibly, he smiled and put up with them all. They raise ’em polite over there in England, apparently. When at last freed from his throne there was a dinner party inside. Someone put on Mingus. Two, three notes into it and Mitchell flipped. I love this!!! Who put this on!!!!!! Outside some guitar players were brutalizing Red House, and inside Mitch Mitchell is hovering over the phonograph, hearing nothing but Mingus. Yeah, alright. They can’t live forever. 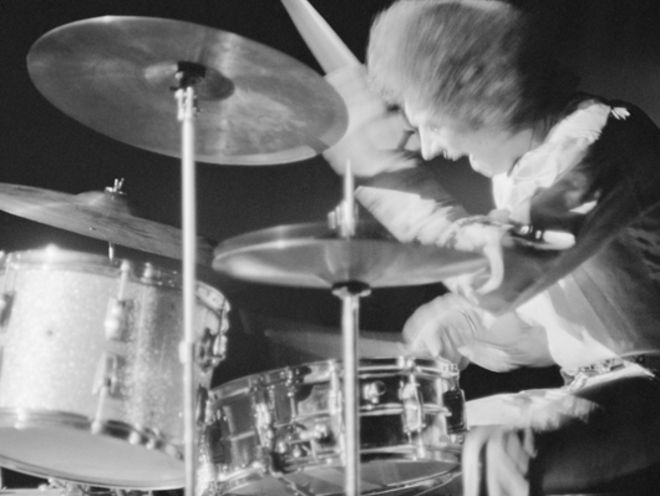 Mitch Mitchell wailing on the snare. 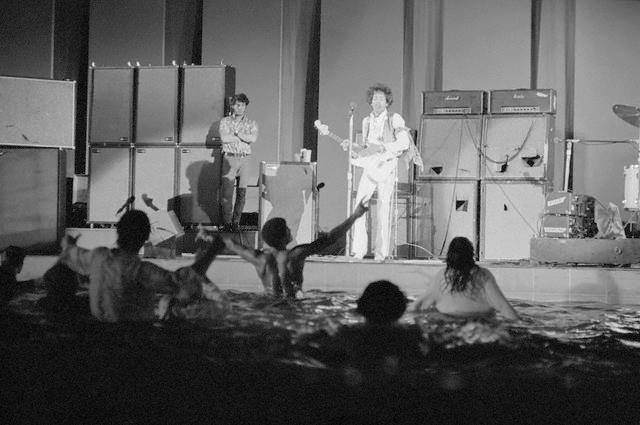 Is it love, baby, or is it just ablution?

Soon afterward they filled in the reflecting pool with tables and rich people. Once I was sitting right about where that guy is standing arms outstretched. He was tripping his hippie brains out, I was drinking two buck chuck and trying to hide the bottle. Our realities began to merge in vivid dreamy hallucinations. A whole herd of  gorgeous wild women wearing nothing but feathers were dancing around me in an endless circle, shaking everything shakeable. Pinch me, I said to my wife, I must be dreaming. She hit me. The vision passed as suddenly as it began and the girls disappeared stage right. The band was still there, shitty as before. I hated the band. They were bumming my trip. Suddenly the vision returned, the women walking across what once was water, glittering, swaying, undulating, their boas like trails that lingered pink and gold. The men at their feet were about as chakra’d as a man can be in mixed company. Then the vision passed again, stage left, for good.  The shitty band remained making their shitty music and totally ruining my trip. No Hendrix for us. That is where me and the wet hippie with the outstretched arms parted. He got an encore, maybe two, and then Wild Thing. I got Never Gonna Let You Go.

One of my best friends, a good buddy from way back, took up flying. This was quite a few years ago, but having known him from his wild thirty something musician days, the thought of him way up there with nothing underneath him scared the hell out me. Every time a plane went down anywhere […]

About all the missing words….

If I got this right, a polyp reproduces asexually, budding by cell division into little bumps that become tiny jellyfish that float about and grow and finally do some sort of jellyfish touchless fuck thing involving male jellyfish releasing vast hordes of sperm into the water and letting the little buggers find their way to […]