Linda Ronstadt’s Long, Long Time must have been a huge hit in LA in 1970 because you’d hear it regularly on the local FM stations for years. All the teenage boys would freeze and listen and sigh. I hadn’t heard it in a while, and maybe the effect is accentuated on this iPhone, but why did producer Elliott Mazer bury her in the strings? Not right away. It’s all Linda Ronstadt for a minute, almost like Kitty Wells, and you’re hooked. But from then on Mazer starts piling strings on by the regiment full, and Linda’s battling to be heard over the arrangements. They’re everywhere, these charts full of lush baroque things growing like triffids, filling every available space. At one point the harpsichord is louder than she is. It’s almost like a Phil Spector thing, Tina Turner batting Phil’s Wagnerian demons on River Deep, Mountain High. Linda finally wins in the end, though, even if the strings and that strutting harpsichordist get to do their dirge thing for a bit too long after her vocal fades, though I suppose the logic of the arrangement demanded it. These things require patience. At last they’re done. That’s a wrap, Mazer said, and maybe someone went to chuck a few too many cellos and violas into the Cumberland. Anyway, a lovely tune. 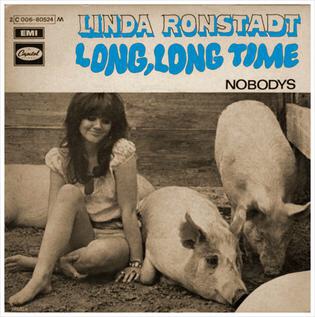 An appallingly bad cover photo. Somebody should have been fired.