Just watched Secret Agent. One of Hitchcock’s sillier films, but I loved it nonetheless. John Gielgud’s character was another of Hitchcock’s pompous twits, Peter Lorre plays a crazed Mexican general apparently on the run from Mexico during their revolution, Robert Young is a characteristically swell American, a million laughs, and then, uncharacteristically, a noirish cad, and of course there’s Madeleine Carroll again, after having just seen her and her legs (and Robert Donat’s hand) in The 39 Steps. She’s nearly as stunning here, down a notch only because of the weaknesses in the script. What a beauty she was. Radiant. I would have been so madly in love with her at the time were I a Brit, unless I was a pompous twit. She slaps Gielgud for his wanton twittery, he slaps her back. The English you know, I’d like to see him try slapping an Irish dame that way. But that is halfway through the film. Flashing back to the beginning, there’s a creepy opener of an air raid, you can hear the rumbling hum of a zeppelin, the periodic explosions of the bombs (dropped back then by hand), the searchlights seeking it out although, in 1916, the German airships were far out of range of any aeroplane and vulnerable to only the luckiest shot of the luckiest gunner. London sat in the dark, helpless. We don’t know that now, we have images of the Blitz and dogfights and batteries of anti-aircraft guns, but British audiences watching this in 1936 or so would have remembered that terror vividly. Very unsettling. Indeed, it wouldn’t be until the V-1s that London would hear the buzzing and wait helplessly for explosions again. But both they and the silent V-2s make for lousy cinematography and scarcely ever made it into movies. No Mrs. Miniver heroics, though I believe Robert Taylor chats up Vivien Leigh while ducking a zeppelin raid in Waterloo Sunset. But I seem to have drifted off into the wrong film. Getting back to Secret Agent, it’s about this time that three of the leads zip off to fun and intrigue in Switzerland. They meet Robert Young there. There are a couple of astonishing sonic sequences, one involving a Swiss Alpine chorus singing tunes that seem to hearken back to ancient harmonies, accompanied by coins swirling metallicly about bowls. Stunning. Just as stunning is the long scene of pipe organ dissonance in a mountain church. Never mind what or how, just wait for it. Creepy and gorgeous. Indeed, far be it from me to leak any of the plot, but it ends in a bewildering train trip to Constantinople though whether they are Turkish or Bulgarian soldiers on board with them I couldn’t quite tell, nor understand just why English spies and a defrocked Mexican general were allowed on military trains with such ease. And the events highlighted in the newspaper headlines at the film’s conclusion refer to Allenby’s (Trevor Howard in Lawrence of Arabia) Palestinian campaign in 1918, while Secret Agent begins in early summer of 1916 and seems to run on for only a fortnight if that, indeed ending before the Battle of the Somme even commences (as there is no mention of it). I’m certain English audiences would have noticed this, one armed Tommies complaining loudly in the lobby afterward till plied with a dram or three at the local pub. And I too was thoroughly confused at this point, even straight and sober as I was, though to be honest I could care less that the plot seemed to have gone off the rails somewhere east of Zurich and had entered some sort of wormhole through space and time, 1916 rendered into 1918 like magic. It’s Hitchcock, why ask for an explanation. Besides, many of the English audience would have read the Somerset Maugham novel anyway, and could have filled in the details apparently excised from the screenplay by the chapter full. Then, as I was busily looking at Madeleine Carroll, the film suddenly ended in one of Hitchcock’s beloved disasters. The screech of metal and madness and irony. A few laughs even. The leads that didn’t die live happily ever after humping their way through the rest of the war. The end. Fortunately no children or puppies were blown up in the making of the picture, nor kitty cats skinned and eaten. Not exactly a classic, but who gives a fuck. It’s Hitchcock.

Up next is Jamaica Inn. Don’t know if I’ve ever seen that one either. 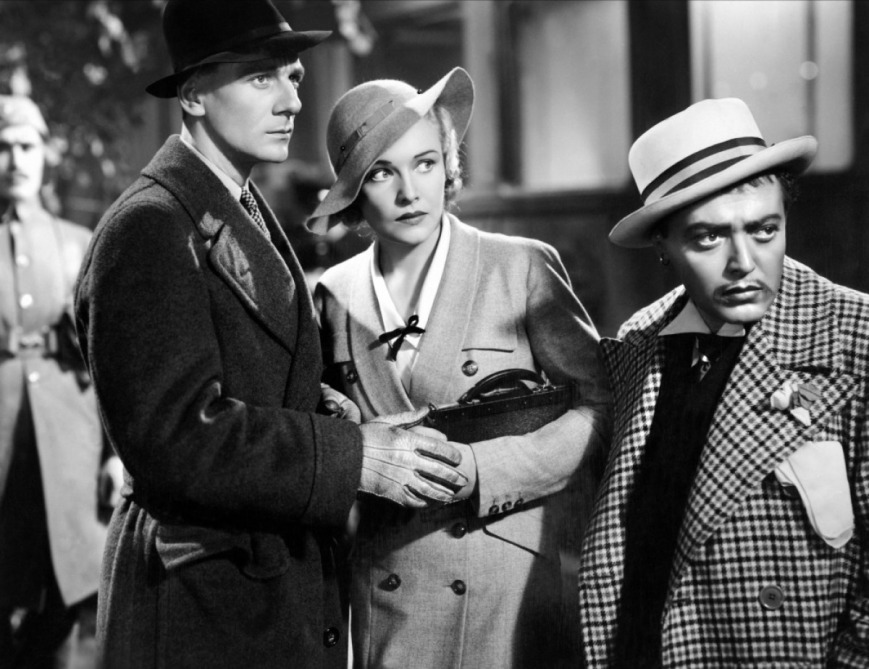 Just remembered I used to tool around Milwaukee on warm summer nights in Pete Fountain’s MG. How I got all 6’5” of me in there I don’t know, but Fyl and I had a ball. Her brother in law had bought it off Pete one weekend in New Orleans after a night of gumbo and […]

Not to change the subject, but this is how evolution gets all fucked up.