I keep falling asleep on the couch during the midnight movies . . . last nite it was On the Waterfront, my fave flick ever. I couldn’t figure out why . . . after all, one of my seizure meds discourages sleep even. Then I read Greg Burk’s latest MetalJazz and he’s going on about the Commercial Advertisement Loudness Mitigation Act. CALM for short. Clever.  He’s crazy about it. No longer can commercials be louder than the programs they’re interrupting. You can imagine Burk before its passage, in his EZ chair, lunging for the remote and cursing the Toyotathon.  No more, though…all is mono-volume, smooth and unsurprising as the Kansas plain. The law went into effect on December 13, about the time I began dozing off before Marlon Brando had a chance to tell Rod Steiger he coulda been a contender.  I am lulled into deep sleep curled up on the couch, surrounded by the new fluffy couch pillows (which don’t help things either). Marlon Brando and Rod Steiger and Ashley Madison and the Mattress King flowing seamlessly together.  Nothing interrupts. No more being jolted awake by those ads for the Trojan Twister and their haunting undertone that men aren’t really necessary at all. But the thing is, I always did my best writing in the wee hours, invariably after being awoken by that delicious babe describing hideous malpractices that can be sued for. She rattles them off, all kinds of scary things,  diseases and deformities and even death. She talks so fast, this chick, and never blinks. Disturbing. And I don’t even know what a vaginal mesh is.  So I’d turn off the TV and turn on the computer and out would come prose. All kinds of prose. A blog’s worth of prose. No more. Now I just sleep, wake up, straighten up the house (I always straighten up the house), read a while and go to bed, the real bed, and sleep again. No prose at all.

There goes my writing career.

Was watching On the Waterfront and when Terry Malloy fesses up to Edie (he didn’t know they were gonna knock him off, he says) there is a helluva racket in the background, a huge clattering pounding. It’s a steam pile driver, and I remember seeing one in downtown Milwaukee thirty years ago. One of the loudest sounds I have ever heard, huge bangs amplified off tall buildings. Almost painful. You had to shout to be heard. I remember being startled at the volume, but the locals didn’t seem to notice. They used to build those monsters in Milwaukee and I suppose they were part of the scenery. No one ever said the industrial revolution was quiet.

Anyway, here’s one in upstate Wisconsin somewhere, at a fair. It’s loud, but it’s hammering wood, not steel. You want to hear it slam steel. You won’t forget it. A clang like the gods themselves, almost. 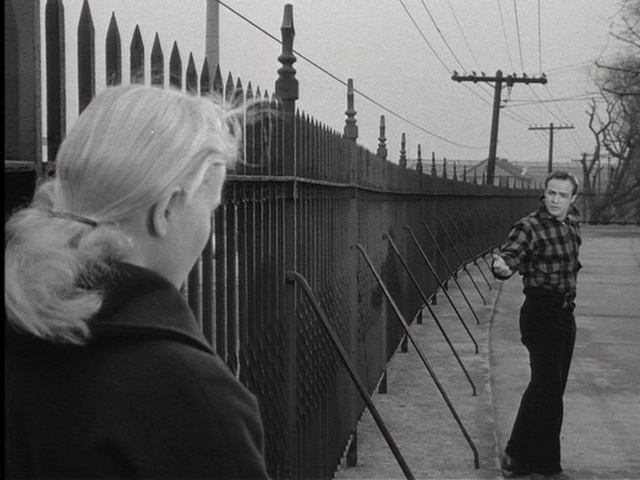 A picture may be worth a thousand words and all that, but it doesn’t make a sound. Without the incredible harbor racket in this scene, the scream of the tugs or the shriek of steam blown off by giant harbor rigs, and especially that pounding, slamming, clanging incessant pile driver, you don’t feel the claustrophobia at all. You can’t tell at all how trapped these two are. You can’t tell anything at all. It’s mute.

The pandemic at Eight O’clock

(from sometime in 2020) The eight o’clock howls began tonight with the shriek of a woman and some crazed percussion on a ceramic pot followed by scattered shouts and shrieks and whistles and ululations and frantic beating on bongos and boxes and beer bottles till literally hundreds of unseen voices join in, welling up from […]

Traffic on the Cahuenga Parkway in 1945. It was only a mile and a half long, it didn’t go the rest of the way into the San Fernando Valley until 1954 (by then it was called the Hollywood Freeway.) Doubtless WW2 had thrown the project off schedule. Gasoline was tightly rationed until the Japanese surrendered […]

A gorgeous item, Paleolithic art in the form of a hand axe created sometime from 300,000 to 500,000 years ago, discovered in Toft, England. Though not a culture like we think of a culture, this is part of what is known as the Acheulean culture, or Acheulean tradition, of tool making you can find all […]

A gorgeous painting of Australopithecus afarensis by paleoartist Viktor Deak. They’ve uncovered hundreds of these guys, who seem to have been around for about a million years three to four million years ago, and though back in the Lucy days it was thought that she and her species were our direct ancestors, now it’s thought […]

I can’t remember the sensation I was talking about here at all now. Even the memory of what it was liked has completely vanished, and until Facebook coughed this up from two years ago I didn’t even realize that that such an ephemeral newness had ever existed, which is a good thing, I guess, it […]

Words seem alive as I write them but lifeless written.

(No idea when I wrote this one, actually.) For me, and I have no idea if this is the same for anyone else, writing is like jazz improvisation. Not free jazz, there’s a melody and structure and it’s very syncopated, so each time I begin writing I’m off on a solo, and I work through […]