Tommy Sands a jazz singer on Hawaii Five-O laying down a hep cat rap worthy of Mezz Mezzrow. You know, Tommy says, it’s like sometimes you’re just riffing along, playing it by ear, and man, like, you hit notes ain’t on a scale, like you can hit anything, man, you’re ten miles tall. I have no idea what’s he’s talking about. Cut to a commercial, and then we’re in a crowded night club scene and I’m wondering who the vibes player is. Tommy is crooning Going Out of My Head. Crowd digs it. After a few more commercials he is shot by Jack Lord. Not sure why. It’s for the better. His girl screams, cradles his head. Jack calls for an ambulance. Tommy says “Nothing but blue sky, baby, blue sky” and expires. Cue the Ventures.

Moral of the story? You don’t fuck with Frank Sinatra. 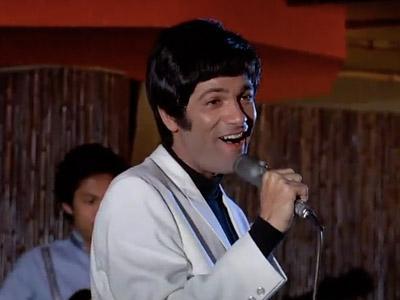 Tommy Sands. A long drop from the Top of the Pops.

In keeping with the spirit of Frank Sinatra’s 100th Birthday, I just noticed I have Lee Solters’ number in my little black book. That was back in the day when Lee Solters would return my calls. Me and Frank Sinatra. Well, Frank was dead by then, but Lee wasn’t, and he would return my phone calls. And that, as the man said, was a very good year.