So I was driving down one of the local boulevards on a moonless night, flipping across the Sirius dial looking for something I could stand and having no luck. Then I hit a pothole and out came Artie Shaw. “Blue Skies” even. I got the car stabilized again–for a second there I was a B-17 in Twelve O’Clock High, going down over Stuttgart–and tried to remember between what wives he recorded this. Judging from the hipness of the arrangement, it would have been between Kathleen Winsor and Doris Dowling. I think around 1951.

He’d just busted up that kinda bebop big band of his. Big bands were a hard sell on the road after the Second World War, and his crowd weren’t into that newfangled stuff. Things change, fans don’t. So Artie packed it in, again. He quit music like he quit wives. You can see it in this picture. His ex-wife Ava is glomming onto him like a night’s worth of sex, he’s got a splitting headache worrying about the biz and Lana Turner has just walked into the room. 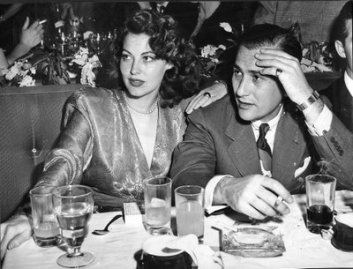 Poor Artie. He should have stayed in the Navy. Air raids were easier than this.

So he cuts the band loose (about the time he cut Kate Winsor loose) and goes back to the old Gramercy 5 thing, plus one, and minus the harpsichord. Swinging little sextet, lots of solo room. Artie Shaw is an underrated jazz player anymore, which is a shame. He certainly proved his mettle on the small group dates. But when he wants to do a big band date by this time he cheats and just pulls in a bunch of studio cats. Results are nice. That’s what this “Blue Skies” was, a studio date with studio players. Driving along in the dark, I was really taken with the extended tenor sax stretch. That’s no old fashioned dance band run. There’s some story telling there. Had to look up the session at home later. It was Herbie Steward, who you likely never heard of. He was one of Woody Herman’s Four Brothers, the phalanx of sax players Woody put out front because they were so goddamn good. Good but, uh, had issues. All the same issue. Herbie’s issue affected his lifetime output more so than brothers Stan Getz and Zoot Sims, but considerably less than brother Serge Chaloff. You have to be a historian to know Serge Chaloff, which is sad. He was a visionary baritone player. He also once drove on a railroad track for a mile without knowing it.  Some guys you don’t let drive. But we’re not talking about the Thundering Herd here, are we. We’re talking about Artie Shaw, his wives, and whatever happened to Herbie Steward. Well he was busy, that Herbie was. One of those 1950’s jazz musicians with two careers. Your ax or your arm, baby, one or the other has to come first. One becomes a way of doing the other. Herbie eventually cleaned up, stuck to the one career, put out a few LP’s, which unfortunately I’ve never heard. At least he had the opportunity to make a comeback. Serge not so much. Though it wasn’t the heroin that killed him. Cancer got him first.

Several years later….I have absolutely no idea where this essay was going. I found it among the drafts.  I just kind of petered out with that last line. It was a good start anyway.