Been rooting for the San Jose Sharks for a couple of play off rounds now, an odd thing for an L.A. Kings fan, but I figured it’d be cool to have all three California teams as Stanley Cup champions. So I was hoping the Sharks would win this sixth game of the series at home and skate with the Cup in Pittsburgh. Sharks were good too, very good, and Joe Thornton, the geezer with the vast and hideous beard, was a force of nature. But it wasn’t enough, and the Pittsburgh Penguins were the best team, again. Now I can go back to loathing the Sharks this fall like a good Kings fan. In the meantime, I can stop hating the same stupid commercials every game and forget all about hockey all summer.

Still, I couldn’t relinquish the hockey season just yet and watched the Pens long victory celebration in the hushed and mostly empty Shark Tank. Most of the Shark fans had already moped out to the parking lot and headed dejectedly home. In the near silence you could hear almost everything the Penguin players said as they took turns skating around the ice with the Stanley Cup, and it occurred to me that this is the only time you will ever hear ‘fucking A’ shouted on television over and over in French, Russian, Finnish, Swedish and assorted central European accents. Finally the cup gets passed on to the assistant coaches, then the equipment managers, the physical therapists, the front office people and on down to the lowliest members of the Pittsburgh Penguins organization. The towel boy nearly topples over when it’s finally his turn with the trophy, but he rights himself, gains his footing, and skates round the ice holding tightly onto the Stanley Cup. He looks fifteen years old and there he is, desperately clinging to a trophy nearly as big as he is, feeling deep down that he had somehow earned that cup too. He’d done his part. He was there with the towels when the players needed them. It wasn’t much, he knew that, but still there he was, spinning around that deeply rutted ice surface for a minute or two with the greatest sports trophy in the world. As he comes round an ESPN reporter is interviewing the great Sydney Crosby. Fucking A, the towel boy yells, unnoticed by anyone on the ice but clearly audible to everyone watching on TV. 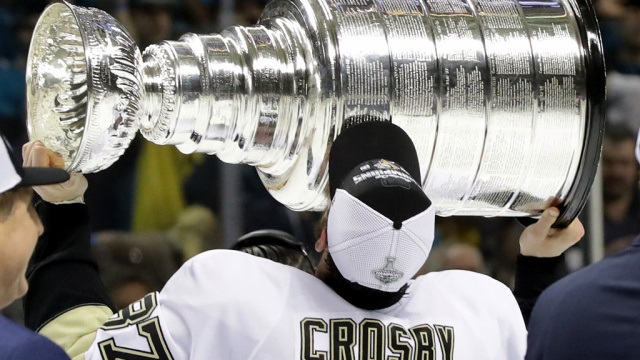