King Vidor’s The Big Parade is a helluva movie, maybe my favorite silent. The battlefield scenes are terrifying, and the end is perfect. John Gilbert was awfully good. You couldn’t see the booze yet. The story about him having a squeaky voice was nonsense, I’ve heard him in talkies and his voice was fine. He just drank himself out of a career, drank himself to death. I remember seeing him in a flick from 1934 called The Captain Hates the Sea, and he is terrific playing a drunk. A failed playwright of a drunk. Like John Barrymore and even Erroll Flynn, drunks play the best drunks. It’s amazing how many raging drinkers came out of Prohibition. That whole Bix Beiderbecke thing. My uncle Carl was one of those. A brilliant pianist who died in a cold Michigan jail of delirium tremens. You can’t even imagine how much hooch that must have been in his short, creative, sad life. That was John Gilbert’s story too. His drinking was completely out of control by the end, despite a series of heart attacks, and not even Marlene Dietrich couldn’t save him, though she tried. He died a year or so after The Captain Hates the Sea, in bed in his huge house way up in the Hills. He was thirty seven. My Uncle Carl’s age. Carl was buried in a cemetery in Flint Michigan, now completely forgotten. John Gilbert is just across the river here at Forest Lawn, on a hillside, in full light, under a blue sky.

Eighty years on we’re still talking about John Gilbert, but for the wrong reasons. John Gilbert, they say, sound did him in. He had that high, squeaky voice. It’s a nasty rumor, mean, emasculating. He’d battled the studios his whole career, and made enemies, and it was probably they–perhaps a mogul, perhaps a publicist–that spread the rumor that, in death, ruined him for good. He may have won a few battles, John Gilbert did, but the studios won the war. They always did back then.

For a long spell in The Big Parade I forgot all about this. Was completely caught up in the story, the three hometown boys, the army life, the front, the shells, the final, cataclysmic battle. This was the western front in 1918, a mad and utterly violent place, beyond all understanding then and even now. There’s a bombardment scene that is unsurpassed. There’s a  panorama of a whole battalion moving forward through machine gun fire, men dropping randomly. John Gilbert is in a shell hole, his leg shot to pieces, staring at a corpse. Maddened with pain and fear and frustration he begins yelling, yelling at the top of his voice. It’s a silent, and there are no subtitles in the scene, but you can hear his outrage, and it is loud and rich and resonant. And when in the end he rushes into the arms of his girl, you smile. 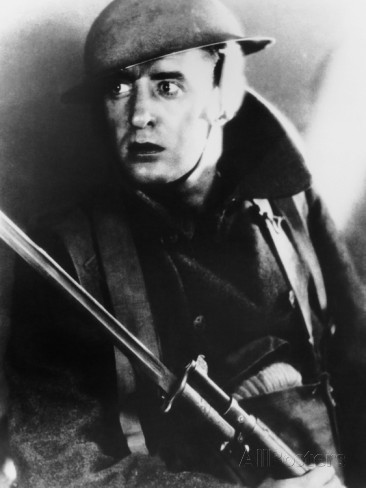