I just saw this picture of Charlie Parker on Facebook: 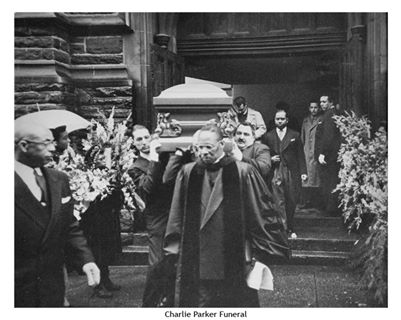 He’s in the box. I see Leonard Feather there, a pall bearer. Charlie Mingus watches from the church door. That was the day they buried Charlie Parker.

I wrote that paragraph and listened to Bird and got angry. Charlie Parker died a junkie. I couldn’t forget that. Couldn’t let that go. I’ve known too many dead junkies. Dozens. I’d rather see a picture of Bird playing than Bird being buried still full of opiates. His wasn’t an honest death.  It was a pathetic death. A junkie’s death is best forgotten. Sorry to be so harsh, but there was yet another memorial show for a junkie the weekend I wrote that, and people pretended they didn’t know how it happened, that death. People always pretend that. But I am sick to death of dead junkies. And I happened to be listening to Bird when I saw this, a sheer coincidence, which only made the casket with his 34 year old bones seem even worse. “People said that Bird was gone”, Jazzbo Collins intoned (on the CD that I was listening to), “Bird was gone.” Jazzbo pauses for a moment. “And now that he really is, it’s like he was never really more here” and Bird Gets the Worm explodes through the speaker. Explodes. Except that explosions release energy in all directions, sheer violence, while Bird knew exactly where every note he played was going. He released the harmonic potential and it exploded in its own crazy violence, changing everything, and laying waste the idea that jazz could ever again be truly popular. Not like it had been. No more jazz millionaires. Jazz was beyond that now.

Bird did that. He was so alive he was scary. He was as vital as a musician could be. He was as innovative as anyone can be. He was certainly one of the most transformational figures in not only jazz, but in western music itself…indeed in western thinking itself. No one truly hip thought the same after Charlie Parker. He did to smart people in the 1940’s what LSD did to smart people in the 1960’s. Bird dismantled everything they knew and put it together in whole new ways. You take a melody, turn it inside out and all these new melodies appear, like magic. Same notes, expanded realities. You could never see anything the same after that. Hidden meanings and subtexts and structures were everywhere, latent, waiting for you to find them. Bebop opened up the world, fragmented it, turned the pieces into new things that were still the old things, just different. We don’t even realize that now, we’re too close to it all. And be bop is still too hard to think about, like Einstein’s physics, or transformational grammar, or the new science of the brain. But they will know who Charlie Parker is a thousand years from now. It’s just too bad he couldn’t have been around to see it. Not even ten years later. He was dead at 34. Slow motion junkie suicide.

I lost my best friend to heroin. He lingered high but alive for fifteen years before they found him facedown in a parking garage, stone dead. The needle was still in his arm, but he hit the pavement so hard it shattered his face. It was Easter morning. He’d just seen his infant son. A talented guy in his own way, a musician, or had been, he lasted a decade longer than Charlie Parker. He’s buried up in the Whittier Hills, and as I drove up the 605 Freeway today this all came back to me again and I sighed.

I watched a guy nod out a few weeks ago. Right in front of me. He tried to pretend he was just sleepy. But he was nodding out. He’d been a junkie his whole life. twice as long as Charlie Parker. You know how you can tell?  A junkie–one of those life long junkies–is always pouting. Even when he’s happy he pouts. You spend most of your life nodding out, you never smile. You never smile and the facial muscles you use to smile go limp from disuse.They lose all their muscle tone. You look at a junkie and he’s nodding out and pouting. They’re not really pouting, they’re too high to give a fuck. You have to give a fuck to pout. Something has to mean something to be poutable. Junkies are just high. The pout just gives them an appearance of humanity. But by the time they get to the permanent pout, they’re well beyond that. Pouting is something you or I do. We have emotions. Junkies, well. they’re just high.

But Charlie Parker had a beautiful smile. He was famous for it. That beautiful smile. I always figured he was spared the pout because he played the saxophone, and that would have left him with enough facial muscle tone to smile and beam and make everyone round him happy, right up to the end, when he keeled over dead watching television up in the Baroness’s room.

It’s too bad he took so many with him. Hundreds easily, maybe thousands. They filled the morgues with young jazz musicians in those days. A good mortician could put a smile back on their faces, too. Stone dead and smiling, just like Charlie Parker.

I don’t know if they called kids in horn rim glasses poindexters when you were kids, and these aren’t exactly poindexter worthy glasses, but I finally gave in and got some glasses that don’t bust after being squeezed onto my skull. Large frame glasses, they’re nice enough to call them. Apparently the hugely skulled are […]