I heard “If You Feel” on the radio tonite, in the car, as I sailed down the 101 freeway, windows open, volume jacked up all the way to eleven. It’s not a song you hear much, but I love it, love the way the drums drive the thing, carry it aloft, make it happen. When I got home I listened to the tune again, then remembered this obituary. It was the summer of 2005….

Spencer Dryden died the other day.  Cancer and other things.  He was 66.  Spencer Dryden played drums in Jefferson Airplane.  And he was my favorite rock drummer.

Dryden played jazz drums in a rock band…that’s what made it so special.  Just listen:

On “If You Feel”, off of Crown of Creation, a stuttering shuffle kicks off the tune into an archetypal Airplane groove, and as the tune picks up he shifts into rapid polyrhythms, sticks never too loud rattling off the snare and back and forth across the toms and sliding around Jack Casady’s massive bass chords.  He tried to play it at Altamont…you can see it in Gimme Shelter, but just as he gets going some biker clocks Marty Balin and that ended it. (Alas, that’s wrong. They’re doing “Other Side of This LIfe” when Marty gets walloped and falls back into the drum kit, knocking over the ride cymbal. Spencer, feeding off the violence, rises to his feet and keeps up the tune’s impulsive, swinging rhythm. I love that moment.)

Or listen to the live version of “3/5’s of a Mile In 10 Seconds” off Bless It’s Pointed Little Head:  Spencer Dryden kicks in with a slamming pair of strokes, then–listen carefully–he takes it down to just about silence, almost air, the faintest pulse of syncopation, and then he brings it back up and kicks the song off with one of his staggered breakbeats.  Just a tiny passage of time, really, a pregnant couple seconds, but to me it always seemed to last forever. One of those looming empty spaces.  It’s a kind of dynamics one doesn’t hear much in rock, where changes come in with the downbeat, orderly, squared off, neat.  Spencer Dryden dug the fact that the beat is there, the rhythm there, always there, in silence even, and a drummer in a rock’n’roll band who digs that can play around it, slide across it, wax and wane and then come in solid, hard, on beat for emphasis, for finality.

After Bathing At Baxter’s is the Jefferson Airplane’s masterwork, their Blues and the Abstract Truth, a record based on some simple themes that, stretched out, arranged, re-imagined, turn into something much much more.  Spencer Dryden is all over the thing.  He opens the album doing an inside out blues beat, goes into some strange thing of his own that quotes at “Blue Monk” (you have to listen closely, but it’s there); lays down angular shuffles, oddly placed accents, tight little fills and gutbucket behind the beat straight rock riffs.  Cymbals splash or sizzle in the background; he was never a loud drummer, and his cymbal work was always subtle for a rock band.  But he was an active drummer.  His bass pedal danced around, he nervously popped and brushed his sticks over his snare, dropped little bombs on his toms, worked out figures and ideas and stories.  Like a jazz drummer.  In a rock band. No Blakey or Big Sid Catlett or Elvin Jones, obviously.  But he took a lot of those jazz ideas and put them into a rock music framework, and made it sound natural.  Baxter’s ends with the anthemic “Saturday Afternoon”, which Dryden takes as a dirge, a funeral march, then doubles, drops in accents and cymbal crashes.  Cymbals and feedback and three part harmony carry it away, to silence and finality.

Spencer Dryden got down.   Not the first time you know.  He got down, but got up to go. And he’s gone. 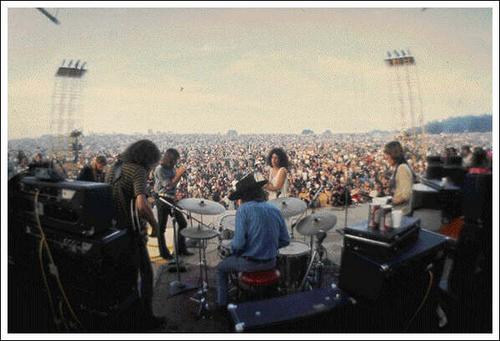 The pandemic at Eight O’clock

(from sometime in 2020) The eight o’clock howls began tonight with the shriek of a woman and some crazed percussion on a ceramic pot followed by scattered shouts and shrieks and whistles and ululations and frantic beating on bongos and boxes and beer bottles till literally hundreds of unseen voices join in, welling up from […]

Traffic on the Cahuenga Parkway in 1945. It was only a mile and a half long, it didn’t go the rest of the way into the San Fernando Valley until 1954 (by then it was called the Hollywood Freeway.) Doubtless WW2 had thrown the project off schedule. Gasoline was tightly rationed until the Japanese surrendered […]

A gorgeous item, Paleolithic art in the form of a hand axe created sometime from 300,000 to 500,000 years ago, discovered in Toft, England. Though not a culture like we think of a culture, this is part of what is known as the Acheulean culture, or Acheulean tradition, of tool making you can find all […]

A gorgeous painting of Australopithecus afarensis by paleoartist Viktor Deak. They’ve uncovered hundreds of these guys, who seem to have been around for about a million years three to four million years ago, and though back in the Lucy days it was thought that she and her species were our direct ancestors, now it’s thought […]

I can’t remember the sensation I was talking about here at all now. Even the memory of what it was liked has completely vanished, and until Facebook coughed this up from two years ago I didn’t even realize that that such an ephemeral newness had ever existed, which is a good thing, I guess, it […]

Words seem alive as I write them but lifeless written.

(No idea when I wrote this one, actually.) For me, and I have no idea if this is the same for anyone else, writing is like jazz improvisation. Not free jazz, there’s a melody and structure and it’s very syncopated, so each time I begin writing I’m off on a solo, and I work through […]